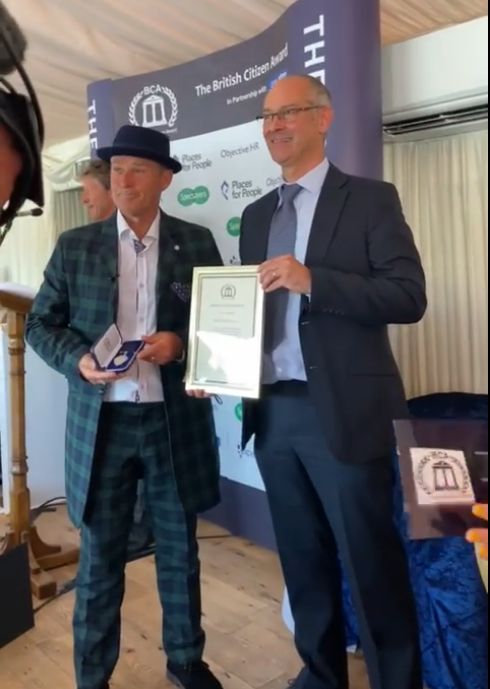 BBC TV presenter Charlie Stayt congratulated the “extraordinary” Michael Cullen (Speedo Mick) for raising “a staggering amount of money” for charity as he presented him with his British Citizen Award in the Palace of Westminster in London.

The BBC Breakfast anchor was delighted to present the accolade to Michael, after previously interviewing him on his show.
At the ceremony, Charlie Stayt said: “On the 2020 roll of honour is an extraordinary man who was granted the BCAV for Volunteering.He completed an endurance walk through the winter from Land’s End to John O’Groats, wearing - just his swimming trunks, his goggles and a hat!

“You might remember a little bit about this story - he was given the nickname ‘Speedo Mick’!”

Charlie Stayt told the audience: “If you are looking carefully, I can confirm from my position here that he is not dressed in his Speedos today. Please welcome the more suitably dressed Michael Cullen!”

After seeing him being presented with his British Citizen Award to the tune of ‘Walk of Life’ by Dire Straits, Charlie Stayt was full of praise for the difference Michael Cullen has been making to people’s lives.

He said: “Let me tell you about Michael. Nothing deters Michael from completing his mission. He has raised over £500,000 - half a million pounds! He is currently running a Foundation to secure help for those who need it most and to help to relieve poverty.

“Michael - it is an amazing achievement, it is a staggering amount of money.”

For Michael, getting dressed up in his best suit for the award ceremony was a welcome short break from his incredible 2,000-mile ‘Giving Back’ trek through the United Kingdom and Ireland. Currently in Wales, he is collecting donations while also presenting funding to charities along the route.

Michael said: “What a fantastic day spent with my family and loved ones and in the company of so many amazing people who were recipients of the British Citizen Award in the Palace of Westminster.

“It's a long long way from here to there but despite ourselves and one day at a time we somehow make it across the bridge to normal living, whatever normal looks like. I could barely string a sentence together or manage to prioritise feeding myself above using drink and drugs and now I'm being invited to a palace to be celebrated for services to the community.

“I also had the BBC there who have just begun to film a documentary about my journey which should be on the telly this January. Thank you so much every single one of you for your support. This is a day I will treasure for the rest of my life. I sincerely believe that whatever you put into the universe you will get back.”

The BCAs are underpinned by the overarching qualities of transparency, integrity, determination and achievement. Among this year’s recipients is Michael Cullen, who is over three months into his latest new mega mission - walking 2,000 miles across the UK and Ireland, collecting donations and handing out up to £250,000 to worthy causes.

The keen Everton fan started in Stornoway on the 31st of May embarking on his mammoth five-month trek across the UK and Ireland to hand out cash raised from his previous adventures - as well as raising even more. The superfit fundraiser, who has twice been nominated for a Pride of Britain Award, first hit the headlines in 2014 by swimming the English Channel in just under 16 hours - despite being a novice swimmer.

He turned up to Everton’s next home game in a pair of blue Speedos with ‘Channel Swimmer’ written on his chest, and his famous look was born.

The SpeedoMick Foundation was set up in 2020 and Mick and a board of trustees works on helping good causes in the fields of homelessness and disadvantaged young people. It aims to work with vulnerable groups to advance education, prevent or relieve poverty and support people facing issues such as ill-health or financial hardship.